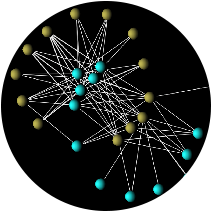 Network thinking has been present ever since the time of Charles Darwin. Nature is a complex web of interaction species, coevolving together in space and time. Many studies have pointed out the existence of universal network traits, but there is no general explanation for their origin. A common explanation is that modularity and nestedness must be evolutionary adaptations. Our study in Nature Ecology and Evolution suggests an alternative. Following the classic work of S. J. Gould and R. C. Lewontin, we refer to these structural patterns as spandrels. Although network features originate as side-effects of generative rules (tinkering), selection can still use them in important and interesting ways.

Pollinator network of Malpighiaceae oil-flowers and associated oil-collecting bees from a Brazillian steppe. Mutualistic interactions like these are very specialized and consistent with universal patterns of nested organisation. Our work shows how statistical properties of synthetic networks evolved by duplication and rewiring are equivalent to those of real-world networks.